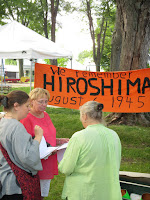 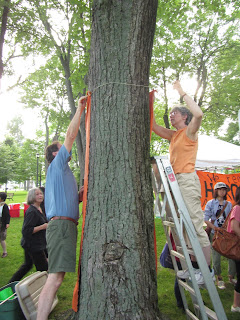 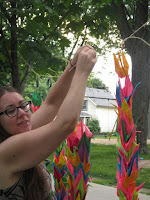 The annual Kingston commemoration of the bombing of Hiroshima, Japan has been held annually in Kingston since near the end of the cold war. Lately it has been held in McBurney Park. (MAP)

On this day, cities around the globe, including Kingston, mark the anniversary to commemorate not only those who died, but also to campaign for the abolishment of all nuclear weapons.


Everyone is welcome to attend this annual event to enjoy music,listen to guest speakers and make peace lanterns. Children will be helped to make their own lanterns.  At dusk, dozens of lanterns are lighted and floated in the wading pool.

“All over the world, August 6 is the day to remember the bombings of Hiroshima and Nagasaki, the destruction it caused, and the suffering by the victims and the survivors,” says event organizer Susanne Cliff-Jungling. “Kingston has been part of these commemorations for over 25 years and we want to remind people that we live in a world where there are over 24 thousand nuclear weapons, more than a thousand of them ready to launch at a moment’s notice.

The recent meltdown of the Fukushima nuclear reactors in Japan, although on a smaller scale than the atomic bomb, is a grim reminder of the consequences of the spread of nuclear radiation.”